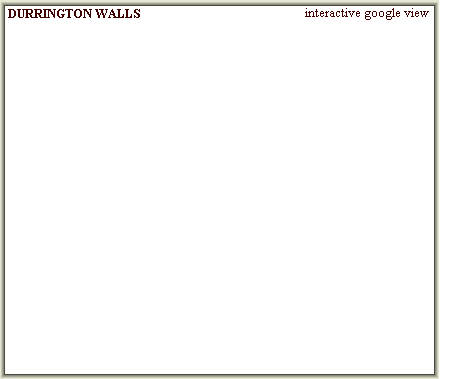 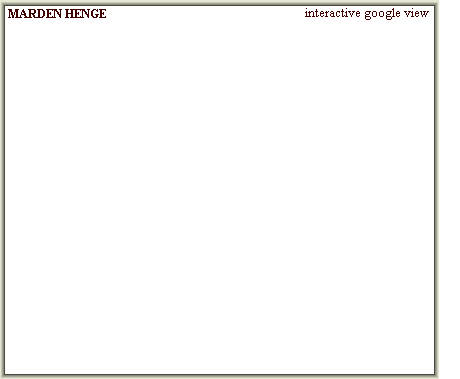 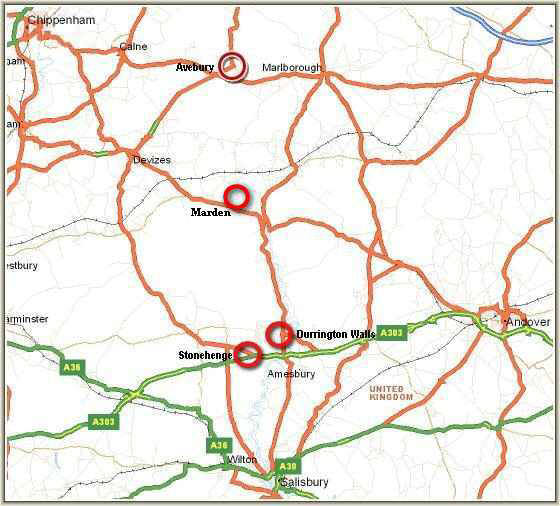 The chronology of Avebury's monuments is impossible to state with any certainty as there is little good evidence on which to draw conclusions. A few carbon datings have been made but some of these are subject to doubt regarding the context in which they were found. Researchers & writers don't agree on many issues so it is difficult publish anything conclusive. For instance there is still no agreement on whether the earthworks came before the erection of the stones or vice versa so the margins of error are likely to be considerable. As with the rest of the website  the chronology given here is mainly based on Burl's ideas with a few modifications suggested by others. Already the recent work on Silbury is pointing to some drastic revisions so the definitive dating of the monuments is still a work in progress and likely to remain so in the foreseeable future.

The Coves of the northern inner circle
& Beckhampton Avenue

The inner circles of the henge

The Outer Circle of the henge

Beaker burials in henge and avenues

(ALL DATES ARE APPROXIMATE. At least +/- 50 years should be assumed in most cases)

As the Neolithic period evolved into the Bronze Age the evidence of activity associated with the Avebury monuments declined. The main focus of any ritual events had moved to the more refined but much less massive monument of Stonehenge that now existed to the south on Salisbury Plain.

Construction of Silbury Hill ..........*likely to be revised (see text at page bottom)

During the Bronze Age a number of round barrows were built on the surrounding downs but there is little evidence of much activity around Avebury during the Iron Age. Throughout the country it has been noted that peoples of the Iron Age deliberately avoided the earlier megalithic constructions from the Neolithic period and Bronze Age. Whatever the  reason Avebury was to be no exception. A few Roman artifacts have been found but it appears that the Romans did nothing to alter the monuments during their period in Britain. The first evidence of any fresh occupation in the area of the henge appeared during the early Saxon period about 600AD.

The Domesday Book gives no indication that a village existed at Avebury but records the church and refers to the earthwork as Aureberie in1086. The name Waledich was applied to the henge during the 13th century. As the village came into existence it became known as Aveberia 1180, Abury by 1386. Avebury first appeared in 1689 though it was many years before it was in common usage.

Better dating techniques have led to the chronology of Stonehenge being revised in recent years. Interestingly it is now evident that later phases of its construction occurred considerably earlier than than had been previously assumed and can now be considered contemporary with the final stages of Avebury.
This implies that substantial populations must have existed in the area of Stonehenge and Avebury at the same time. Whether the builders of Stonehenge, Woodhenge and the enormous henge at Durrington Walls  were the same or separate from the creators of Avebury is interesting to consider as the distance between the two locations is quite small at around 20 miles and the stones for both monuments came from the same source. Given the current datings it would seem that the largest stones at Stonehenge were probably being erected soon after (or even before) Silbury had reached completion. It certainly seems likely that the Avebury avenues were being added during the same period and the enclosures constructed. This makes the relation ship between Avebury and Stonehenge regarding how both sites were being used especially interesting.
(Work and research currently taking place at Silbury Hill are now indicating that its construction probably commenced around 2400 BC which makes its relationship to Stonehenge even closer....When the work is completed and any revised dates are published this page will be updated accordingly).

Almost completely destroyed the remains of Marden Henge are now barely visible. It is situated roughly mid-way between Avebury and Stonehenge and enclosed an area even larger than either Avebury or Durrington. Within it a massive mound known as Hatfield Barrow once existed which has now also been eradicated by continuous farming. Excavation of the site hasn't been very extensive but has established that it belongs to the Neolithic period. Quite how it relates to Avebury and Stonehenge/Durrington can only be guessed at.
Information regarding Marden Henge can be found here

The henge at Durrington has fared better though still much depleted.

During 2010 fresh research and excavation is being carried out at Marden Henge. Progress can be followed on this website