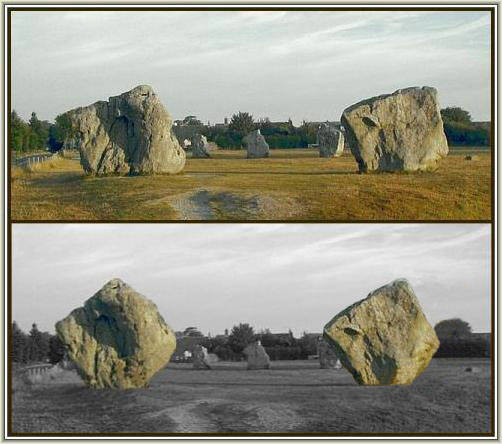 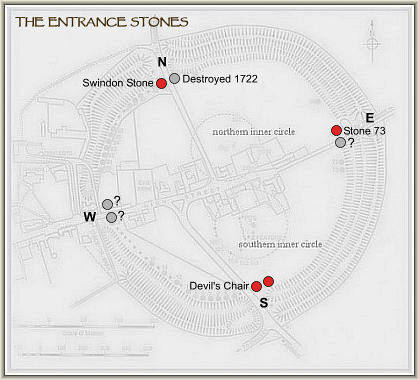 Unless anything to the contrary is found it would seem logical to assume that some notable stones had once stood at either side of the west entrance. These presumably succumbed very early on to the encroachment of the village into the henge their likely position having been somewhere adjacent to or under the High Street. Given that these missing stones would have formed the portal to the Beckhampton Avenue it would be reasonable to imagine that they might have been of similar grandeur to the massive stones that still stand at the south entrance. The re-constructed remnants of stone no.24 stand nearby but gives no hint of how big the west entrance stones might have been. This, once broken up stone, is assembled from some fragments recovered by Alexander Keiller. Its strange appearance reveals that it is far from complete and its original size remains unknown. It is interesting to note that William Stukeley's 1723 sketch of the village appears to show two stones lying in the area of the west entrance which may have been evidence of the portal megaliths and one of them is very close to what is now the sad and depleted assemblage of stone no.24.

The stones at the south entrance 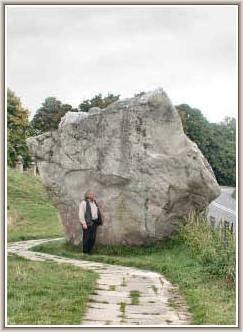 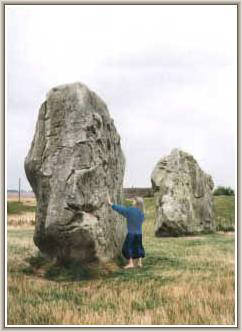 Stone no.73 lies on its side near the east entrance

The surviving stones in the north west quadrant adjacent to the "Swindon Stone" indicate that rather than just the entrance stones being of considerable size there was an intention to increase the size of the stones as they got progressively nearer to the entrances. Although stone no.45 is now missing its position indicates that the spacing of the stones may also have been reduced at the same time. Unfortunately so few stones have survived adjacent to the other entrances this has to remain conjecture though Stukeley recorded the fact that the stones of the West Kennet Avenue increased in size as they neared the south entrance. 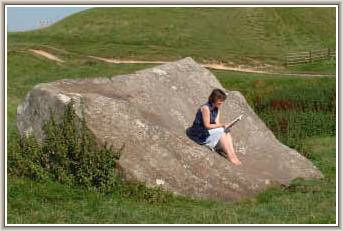 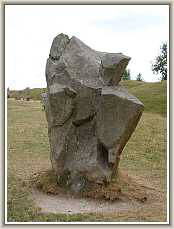 Known as "The Blacksmith's Stone"
stone no.24 is an assembly of
fragments recovered from a forge
by Alexander Keiller. 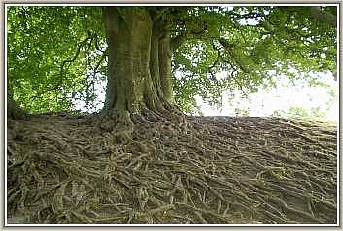 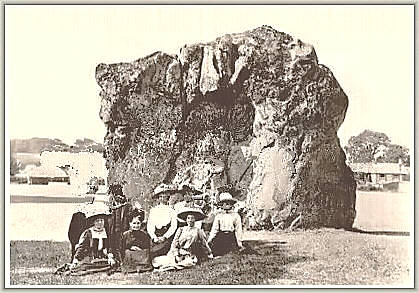 One of my most powerful memories of Avebury is the first time that I stood up against the Swindon Stone. After many visits over the years the feeling of awe I feel when standing by these monstrous megaliths never diminishes. I sometimes wonder how many people visit Avebury but miss out on what I would term "The Closeness Effect". To fully appreciate the overwhelming  size of the entrance stones it is neccessary to be able to touch them....even standing a few feet away somehow diminishes their size. The effort and inspiration it would take to move and erect these colossal pieces of sarsen would be daunting today even with modern equipment. Quite how the builders of Avebury achieved it is almost beyond the imagination.

A small, naturally formed, ledge has created a"seat" on the outside of this south entrance stone. As a result the stone is now known as "The Devil's Chair"and has become associated with local legend & folklore.

As well as the mighty stone no.73 the east entrance is worth a visit to see the spectacular tree roots that cover the outer bank nearby. It is reported that "Lord of the Rings" author J.R.R.Tolkien derived some of his inspiration from visiting this natural wonder at Avebury.

Given the orientation of the"Swindon Stone" it seems a possibility that the stones at the south entrance may have been originally erected in a more upright manner but have now slumped to their present positions. If this is the case then their appearance may have once been more like the adjusted image shown below. (also see "Longstones" page).

Apart from the Obelisk and the components of the Cove in the northern inner circle the largest stones used in the construction of the henge were those at either side of the entrances on the outer circle. Fortunately three of these remain in position so that we can still stand beside them in awe of their 60 ton bulk and the effort it must have taken to move and erect them. Although stone no.73 now lays on its side near the eastern entrance it is still worth a visit as it is also of impressive bulk. Unfortunately the diamond-shaped "Swindon Stone" that stands dramatically close to the road at the north entrance has lost its partner which reportedly fell in1722 and was destroyed. This missing stone was recorded as being of tremendous size and possibly as much as 90 tons in weight which would have made it substantially larger than any of the stones that are there now. ( A recent re-appraisal of the Cove stones may now challenge this statement ). More fortunate have been both of the massive stones that form the south entrance which have survived to greet the visitor approaching the henge from the direction of West Kennet. 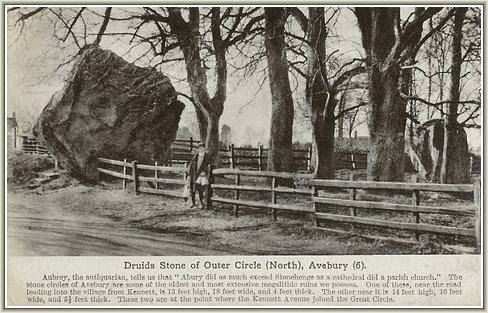 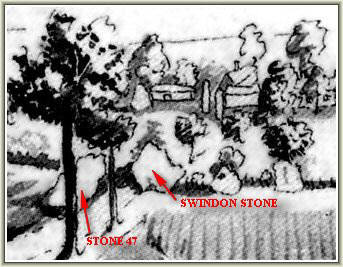 This sketch by William Stukeley shows the fallen partner of the "Swindon Stone" (Stone 47) before its destruction in 1722. It looks that it may have been pillar-like and probably similar to the Obelisk of the Southern Inner Circle. Stukeley states that it "measured full 22 feet long". The northern entrance may therefore have been guarded by "male" & "female"stones in contrast to the two "female" stones that still stand at the southern entrance.

Another point to consider is the substantial amount of modifications to the bank and ditch that have taken place at the entrances since the henge was built. The modern roads don't reflect the precise positions of any of the original entrances. Most severely altered has been the southern entrance where today's road runs over the infilled ditch with the original causeway remaining to the east and aligned with the two massive entrance stones. The section of bank at the south entrance on which the familiar group of large trees now stand is in fact an 11m extension added sometime after the 16th century. This makes it confusing  to visualise quite how the avenue originally joined the henge. 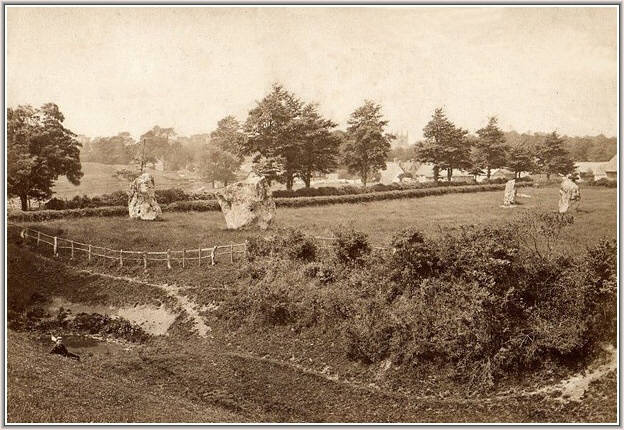 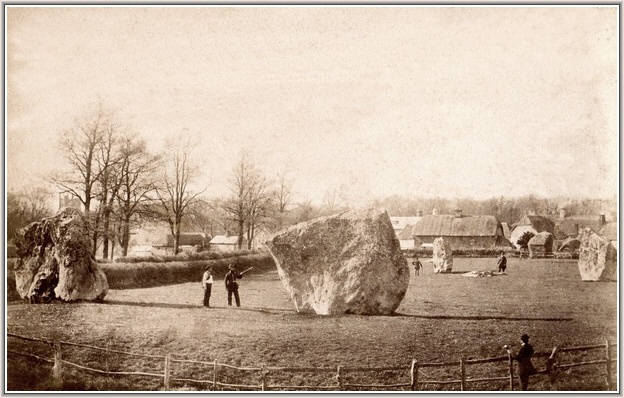 The above pair of images show the South Entrance and are believed to be circa.1890
(courtesy of the Evans family of Curdale Farm) 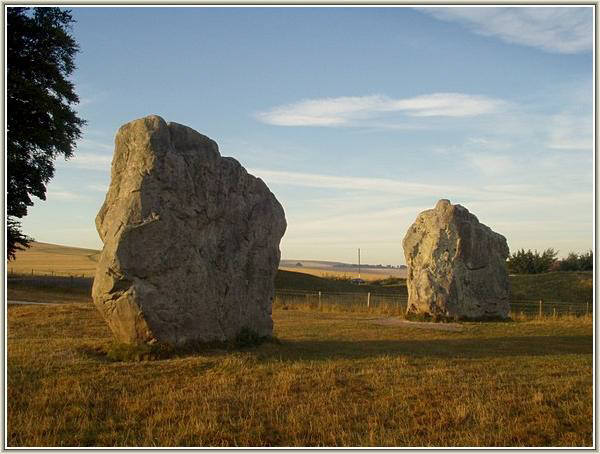