These are the monuments which receive most attention from the visitor to Avebury but there are others which are equally important. The early settlement of Windmill Hill lies on the higher ground to the north-west of the henge and the remnants of two enormous enclosures lie buried in the valley between Silbury Hill and the Sanctuary. Lesser sites of note are Falkner's Circle and the long barrows of South Street and Beckhampton. There are many round barrows in the area, some of the most prominent being on Overton Hill next to the Ridgeway. However, these are products of the Bronze Age and were built several centuries later than the massive creations that had been constructed during the Neolithic period.

Considering Avebury's historical importance much of it has yet to be thoroughly investigated. Archaeological research requires substantial funding and much is consumed these days by the need to investigate the potential history being devoured by new building development and road construction. New investigation of protected sites tends, therefore, to lack priority. Fortunately, for those of us with an enduring interest in Avebury, recent years have brought much fresh research and excavation to the monuments which is helping to resolve some long disputed questions and revealing the existence of some previously unknown features. Geophysical surveys and aerial photography have shown a number within the henge itself and investigation of these in the near future is under negotiation. Several stones of the elusive Beckhampton Avenue have also been found since 1999 and recent surveys have confirmed that many stones of the outer circle still lie buried within the henge. The present time holds the promise of some exciting new discoveries which will hopefully expand our knowledge of this remarkable pre-historic complex.

The following pages will hopefully give the reader some interesting information about Avebury and its components, though anyone reading the available Avebury literature will soon realise that much is still the domain of the theorist and qualified researchers continue to be fluid about many aspects of its history. We can only marvel at its existence and acknowledge that the real truth about it is likely to remain beyond reach.

Silbury Hill remains one of the most enigmatic objects that our ancestors have left us to ponder over. Despite various attempts using tunnels to try and discover the secrets of this 130 feet high wonder of prehistoric engineering it still continues in its awesome way to baffle and impress us.

Beyond Silbury Hill and on the other side of the main A4 road a walk of about 1/2 a mile brings you to the West Kennet Long Barrow which is the largest example in the country that is accessible to the public. Situated on the sky-line it is well worth the walk as it has its own special atmosphere which more than anywhere at Avebury seems to bridge the years. Almost a mile to the south-east can be glimpsed the tree-covered East Kennet Long Barrow..... Slightly larger in size it still awaits thorough investigation.

At the heart of pre-historic Avebury is the henge. Compared with other henges it is massive and though erosion and vandalism have reduced it considerably it still remains an impressive spectacle. Its construction was spread over several centuries beginning about 3000 BC when the Cove and the earliest stage of the Sanctuary were built. It would be another 600 years before the final form was achieved when the avenues were added about 2400 BC. It consists of a circle of land surrounded by a ditch and bank, the bank being outermost. The area covered by the circle is about 28.5 acres and the circumference is approximately 0.8 of a mile. Around the outside of the circle once stood 98 large sarsen stones some of which weighed as much as 60 tons and perhaps more. Within this large outer ring are the remains of two smaller stone circles one of which originally consisted of 27 stones and was about 320 feet in diameter (northern circle) and the other which was about 340 feet in diameter and consisted of 29 stones (southern circle). Both of these inner circles are each much larger than the circle of stones at Stonehenge. It has been calculated that the area occupied by the stone circle at Stonehenge would fit into the outer stone circle at Avebury around 130 times. This gives some idea of how vast the Avebury Henge is.

There are four entrances to the circle each roughly at the cardinal points of the compass. From the south and west entrances going away from the henge are the remains of two stone avenues. The Beckhampton Avenue which runs from the west entrance is barely evident to-day although, almost a mile from the henge, the two Longstones still stand to reveal where it once existed. The West Kennet Avenue which runs from the southern entrance has survived much better and still presents a spectacle as it stretches across the countryside on its way to joining with the small circle of the mysterious but now destroyed Sanctuary a mile and a half distant.

About a mile to the south of the Avebury circle lies the biggest man-made mound in Europe. 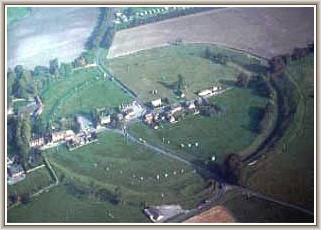 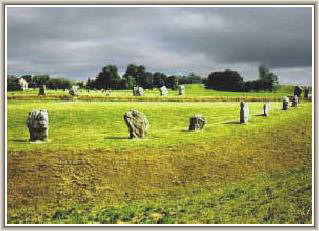 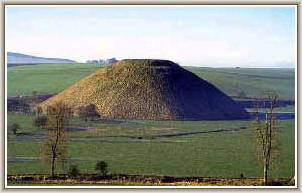 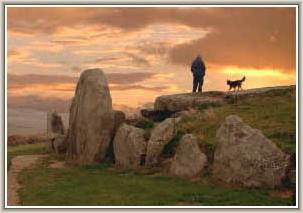 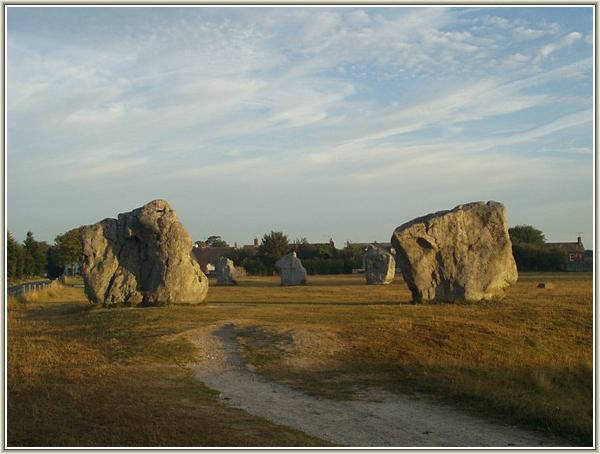