For anyone wishing to learn about Avebury from scratch the site is designed to be gone through in the order the menu is presented. Although some personal views are expressed on occasion great care has been taken to provide information that comes from reputable and reliable sources.
Unlike a published book, a website has the advantage that it can be continually revised and updated.....a process that Avebury itself seems to have been subject to. As my own ideas evolve and fresh information comes to light I hope that most regular(hopefully!) visitors to this site will appreciate any changes that are made.

A prominent mound that exists near the A4 road between Silbury Hill and West Kennet is now being regarded as of possible pre-historic interest. Some details about it can be
found via the Silbury Hill page see: "The Silbaby Question"

A full facsimile copy of William Stukeley's book "Abury - A Temple of the British Druids" has now been added to the site. Although Stukeley's own exotic and academically inspired theories dominate much of the text, for researchers it remains one of the most important and essential sources of information about Avebury's past. 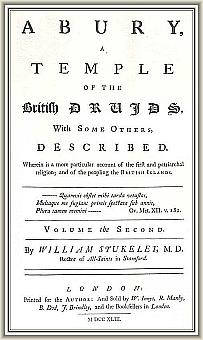 The book contains a large scale plan which Stukeley made of the henge. This contains much fascinating information and can be found via "The Shame" page.

Situated in southern England in the county of Wiltshire the village of Avebury is close to two small streams....the Winterbourne and the Sambourne which unite to form the source of the River Kennet. After being re-inforced by a number of springs this beautiful English river rapidly gains in stature as it passes through the North Wessex Downs on its way to Reading where it eventually flows into the River Thames of which it has become the main tributary. The waters of the Kennet therefore pass through London before reaching their ultimate destination in the North Sea.

Around 4,500 years ago, when the site of England's capital was a thinly inhabited marshland, the area around Avebury almost certainly formed the Neolithic equivalent of a city. By coincidence this waterway has become a link between the two largest cultural centres of their day to have ever existed in the British Isles. As London now contains most of England's largest buildings Avebury is the location of the mightiest megalithic complex to have ever been constructed in Britain. This henge with its enormous ditch, bank, stones and avenues survives in a much depleted state but the nearby Silbury Hill which is the largest man-made mound in pre-industrial Europe still dominates the surrounding landscape. The two largest surviving British long barrows of West Kennet and East Kennet are also prominent a short distance away and in recent years the remains of two massive palisaded enclosures have also been found. The quote that antiquarian John Aubrey made of Avebury......"it does as much exceed in greatness the so renowned Stonehenge as a Cathedral doeth a parish church" recognises the true importance of what has now been largely absorbed into the modern landscape of Wiltshire. If we could return to the time when the Romans occupied the British Isles it is a sobering thought that we would have to go back as far again to find an Avebury that was already several centuries old.

The history of the modern village is inevitably linked to the prehistoric monuments that surround it. Abandoned for several thousand years the land around the stones became occupied oncemore when people of the Saxon period began to settle in the area. Their arrival and subsequent development of the present village was to have a dramatic effect on the history of the stones. The relationship between the local inhabitants and the monuments has now added an unfortunate dimension to the Avebury story that helps make it one of the most fascinating historical sites to be found in the British Isles if not the world.

It remains a magical place as so many who have been there will agree. A visit to Avebury is a very personal event. It still seems to retain, somehow, the spirits of all those who laboured in its creation or whatever it was that led them to create it. If you have never been there a visit will not be an empty experience. You will come away with a head full of questions and probably a realisation that somewhere over the years modern society has lost something important.

IMPORTANT NOTICE:
If you intend to visit the Avebury area
in the near future CLICK HERE

PLANNING A DAY TRIP ?
If you are visiting Avebury for the first time and would like to follow a suggested itinery that could help maximise your visit a printable guide and map are available HERE

The primary sources of information for this website have been Aubrey Burl's excellent "Prehistoric Avebury" (second edition), "Windmill Hill & Avebury -  Excavations by Alexander Keiller 1925-1939" (Isobel Smith).
"Avebury" by Joshua Pollard & Mark Gillings.
"Landscape of the Megaliths" by Mark Gillings, Joshua Pollard, David Wheatley & Rick Peterson.
William Stukeley's "Abury - A Temple of the British Druids" is an invaluable resource and many smaller publications have supplied a wealth of interesting and useful information.
Although my own views don't neccessarily reflect those of current researchers the staff of Southampton University amongst other individuals have been very helpful in supplying information & advice on some elements of the website.

PLEASE NOTE: If the default text size in your browser is set to
larger than normal/medium the pages may not display correctly.
If you are using a translation service you may need to decrease
the text size depending on the language selected.

ABOUT DATES:
The dates given for the monuments throughout the site should be treated with some caution....see the Chronology page for details.

Published by Oxbow Books is "The Landscape of the Megaliths" by Mark Gillings, Joshua Pollard, David Wheatley & Rick Peterson.
This covers in detail the results of the excavations that were carried out at Avebury during the period 1997 - 2003. It also includes much reappraisal of long held ideas about the monuments and must be regarded as essential reading for all pursuing the most current information.

Hugo Jenks has produced an Avebury calendar with some nice photographs.
It can be printed out from the .pdf  file. Obtain it from the downloads page on Hugo's interesting website here

The Avebury Community Shop now serves the village.
It has its own website that can be visited here

A well produced new DVD.... "Standing with Stones" will take you on a thorough  tour of Britain's many Neolithic & Bronze Age sites....Details & previews   here

ACCOMODATION IN THE AVEBURY AREA....A number of local
places to stay are listed on the Village  page.

"Avebury - A Lady in Waiting" is a new book recently published by Avebury researcher Roy Goutte.  It reveals his theories regarding the purpose of the complex. Details are available from his website here

AVEBURY & DISTRICT CLUB was originally built as the Avebury branch of the Royal British Legion. Adjacent to the south -west quadrant of the henge it first opened in 1927 and continues to serve the community socially with various events throughout the year..... Details can be found on the club's website here

"WEST KENNET LONG BARROW: Landscape, Shamans and the Cosmos."
is a new book by Avebury researcher Peter Knight.....Details can be found here

NIGHT PHOTOGRAPHY AT AVEBURY is a collection of fascinating images by Dave Baldwin. They can be found on his website here

THE GREAT STONES WAY is an exciting new development that will compliment the existing restored Ridgeway. Details can be found here

MERLIN'S MARLBOROUGH   is a useful website for visitors. It is devoted to Marlborough and the surrounding area and can be found here

Now updated with results of 2003 geophysical survey.
For more detail about this plan see "The Marmalade Man" page.

"EXPLORING AVEBURY: THE ESSENTIAL GUIDE" is a new book by  Steve Marshall.  Details of his book and other projects can be found on Steve's website here 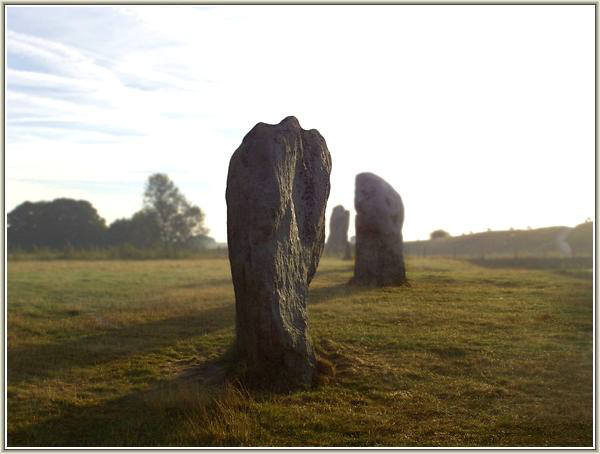 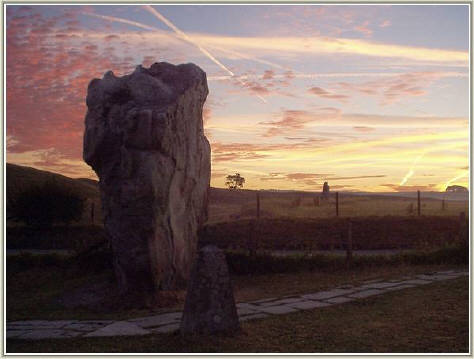