The English Civil War came to the vicinity of Avebury during the July of 1643 when the Battle of Roundway Down was fought a few miles to the southwest on the high ground overlooking Devizes. By all accounts it was a very bloody affair with the Parliamentary forces of Sir William Waller being virtually annihilated. This put the Royalist forces in a strong position to destroy all Parliamentary strongholds in the west. Bristol, notably, being taken shortly after. Ultimately, though, the Civil War was to be a victory for Parliament resulting in the execution of Charles I in 1649, this being the same year that John Aubrey was to have his first encounter with Avebury on January 7th. which was three weeks before the demise of the King. The interest Aubrey had in the monument was to lead to a visit by Charles II who, after the monarchy had been re-instated, inherited the throne from his unfortunate father.

It is from the Civil War period that the first documentary evidence of stone breaking around Avebury appears. Richard Symonds, a Royalist soldier in the area at that time recorded the following in his diary dated November 11th, 1644:

' a place so full of a grey pibble stone of great bignes as is not usually seene;  they breake them and build their howses of them and walls, laying mosse betweene, the inhabaitants calling them Saracens' stones, and in this parish, a myle and a halfe in length, they lie so thick as you may goe upon them all the way. They call that place the Grey-weathers, because a far off they looke like a flock of sheepe.' (Symonds 1859.151)

This is taken as a reference  to the sarsen fields at Fyfield.

There are reports that some of Britain's Neolithic heritage fell victim to the ensuing puritanical ravages which caused such destruction and regrettable loss to many churches, statues and other notable buildings but whether any of Avebury's prehistoric legacy suffered from similar motives seems uncertain. It is easy to think that it might have been the excuse used to begin destroying the actual stones of the monuments themselves.

The Civil War has left a ghostly legacy in the village with The Red Lion Inn supposedly haunted by the spirit of an adulterous wife murdered by her soldier husband who threw her down the well that exists within the pub. The Manor House is also said to be still visited by an earlier owner who commited suicide after losing all his possessions during the war. Another suicidal visitor to the Manor is said to be a young girl who threw herself from a window after her Cavalier lover had been killed in battle. 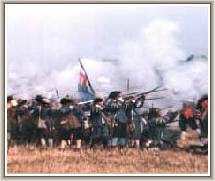 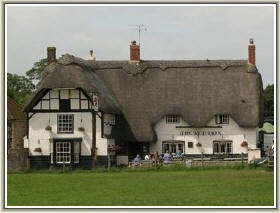 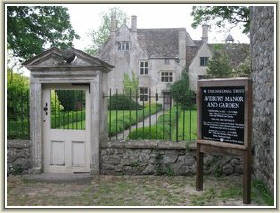 Back in the natural world a much earlier conflict is recorded as having taken place on Overton Hill near the Sanctuary when Danish forces met local resistance on the Ridgeway shortly after they invaded the country in 1006.

CLICK BUTTON for more detail about ghosts
at Avebury & throughout Wiltshire.