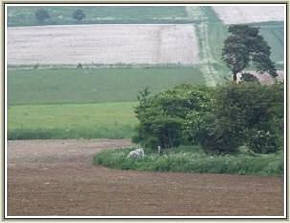 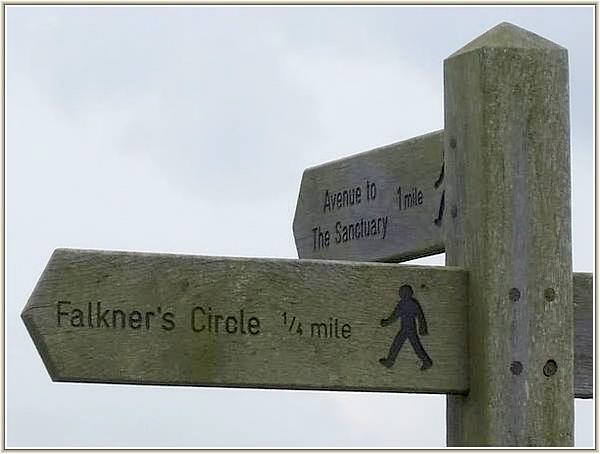 A few hundred metres to the east of the West Kennet Avenue at a point about one third of the way along its length are the remains of a small stone circle known as "Falkner's Circle". It was partially excavated in 2002 and evidence of burning pits and stone destruction were found. About 36 metres in diameter it was originally thought to have consisted of 10-12 stones only one of which now exists. At present the relevance of the circle to the rest of the Avebury complex remains a mystery. 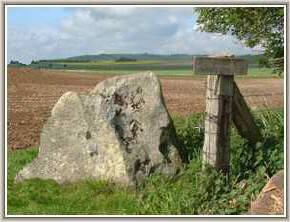 The circle is named after a Mr.Falkner who was an antiquary from Devizes.
He first identified it in 1840 and his account of it is as related toWilliam Long is as follows.......

In the dip of the hill between the Kennet avenue and a slight oblong earthwork on the slope of Hackpen Hill, a solitary stone is standing. Mr. Falkner of Devizes, has favored [sic] me with the following account of his observations in connection with it. "The stone which you saw in a field on the left, when you went along the avenue towards Kennet, was seen by me in 1840. I went to it, and found it was one of a circle that had existed at some former period. There were two other stones lying on the ground, and nine hollow places, from which stones had been removed, making twelve altogether. I made a note of it at the time, and the person with whom I was riding observed it also. The circle was then in a meadow, which was broken up a few years afterwards, and two of the stones removed. The circle was 282½ yards from the nearest part of the avenue. I could not have been mistaken as to the fact of a circle being there, and considered the discovery of sufficient importance to write to the Rev. E. Duke on the subject, who was not aware of what I told him, nor could he explain the matter at all, - only suggesting that the stones might have been set round a large tumulus, - but the ground was quite flat within the circle, which was about 120 feet in diameter." (Long 1858, 345-6)

Some doubt has existed as to whether he was reporting a genuine circle, some other form of megalithic structure or a random assemblage of stones. The results of the 2002 excavations seem to confirm that the feature was indeed a circle. Curiously this component of the Avebury complex was overlooked by both John Aubrey and William Stukeley.

CLICK THE BUTTON for an official resumé of the 2002 findings.